How to Deploy and Setup HoneyDrop Honeypot in AWS

The HoneyDrop appliance is a low-interaction honeypot meant to be deployed in subnets where critical visibility of malicious activities is needed. The HoneyDrop can be configured to emulate:

When the HoneyDrop appliance is interacted with, logs are generated and sent to AWS CloudWatch within seconds for alerting. These alerts can trigger SNS notifications to send emails, SMS messages or launch Lambda functions.

The following steps will explain how to setup and deploy the HoneyDrop appliance.

In the example below, we've setup a Linux MySQL honeypot and are allowing connections to MySQL, SSH and VNC:

And that's it! Your appliance should now be up and running in your environment. Test the services you enabled by interacting with them and see the alerts appear in AWS CloudWatch. 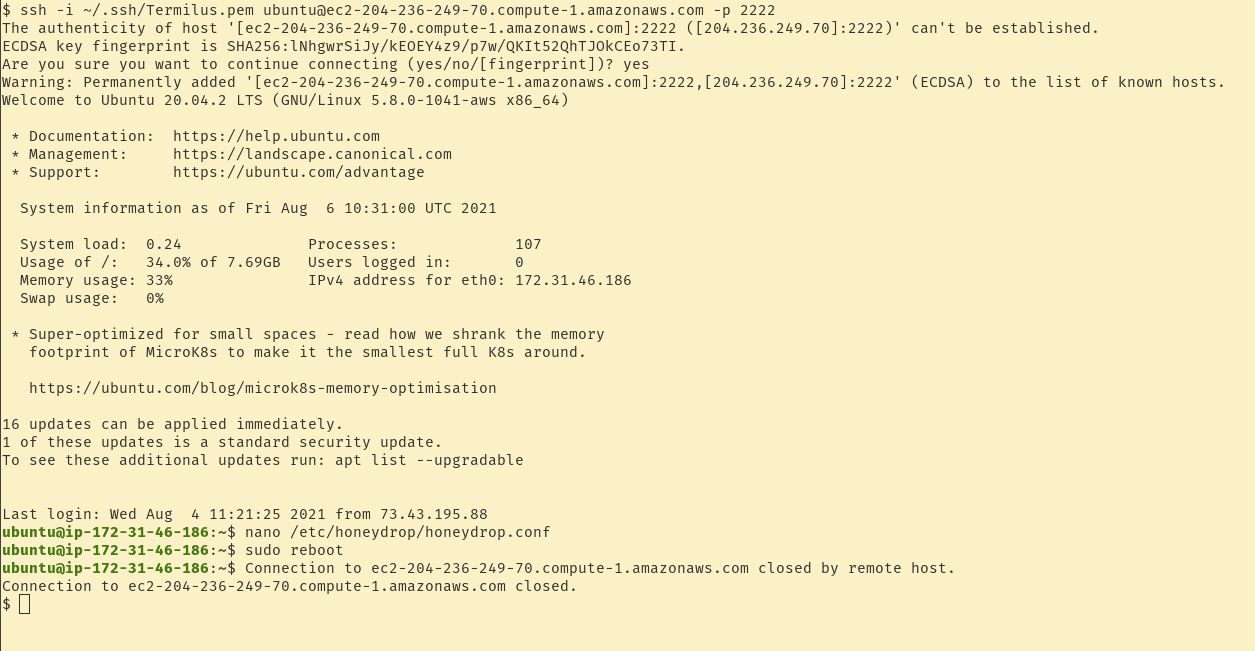 Now that your HoneyDrop appliance is set up and configured, it's time to configure some alerts.

First, let's configure the metric filter within CloudWatch Logs. This is necessary to identify events triggered by the HoneyDrop appliance. AWS does a great job explaining the setup here, but for the sake of simplicity, navigate here and click on "Create Metric Filter".

Here we will set the filter pattern to "src_host". This means that any time an event is recorded, the metric filter will be triggered since all HoneyDrop events capture the source host field in their logs. Set the additional parameters according to the image below. 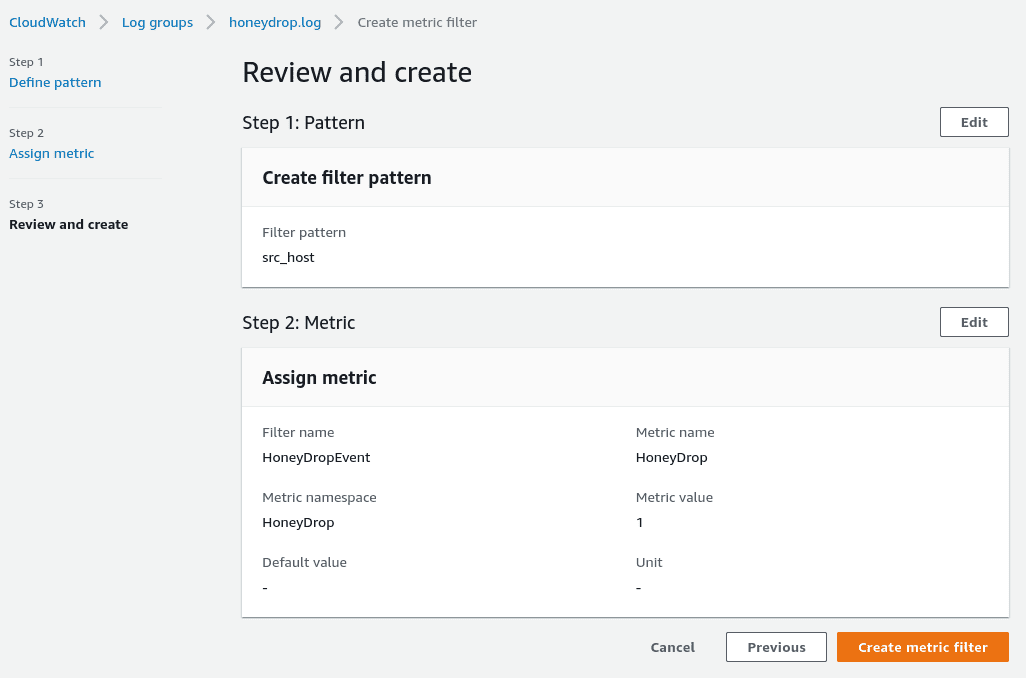 Next, we need to setup our SNS topic. This is the mechanism that will send an email out whenever the HoneyDrop catches an attacker. We'll start by navigating to AWS Simple Notification Service (SNS) and clicking on "Topics", or just click here. Now, click on "Create topic". Enter the details according to the following image.

Don't forget to check your email and click "Confirm subscription". 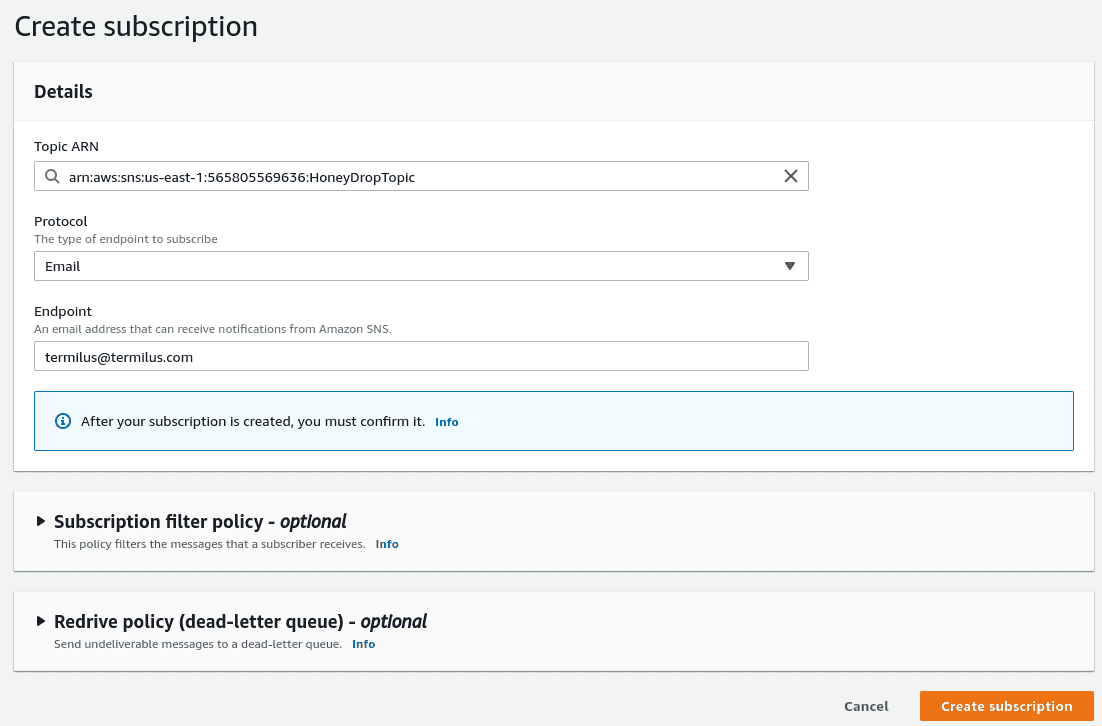 Next, we'll configure a CloudWatch alarm. Navigate to the the "All alarms" pane in CloudWatch, here and click "Create alarm" and then "Select metric". Here, we'll select "HoneyDropMetrics", then "Metrics with no dimensions", then check "HoneyDropEvent" and click "Select metric". Now, enter the metric and condition details according to the following images and click "Next". 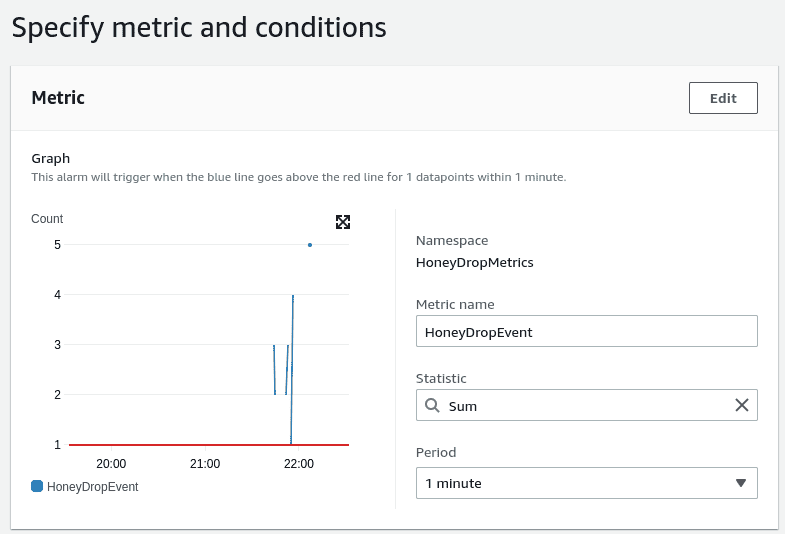 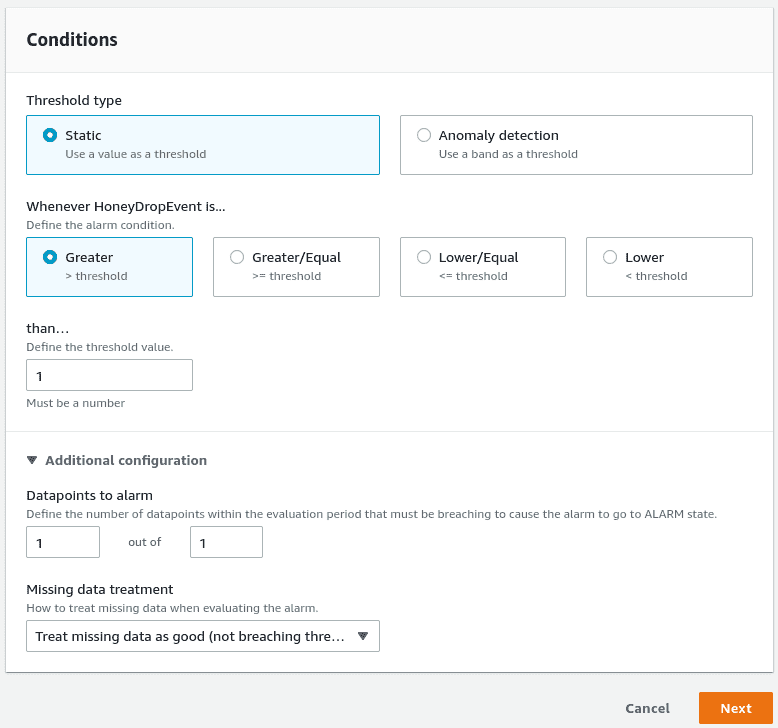 Now, we'll configure the alarm to send our SNS notification whenever it's triggered. Once our SNS topic is selected, we can hit "Next". 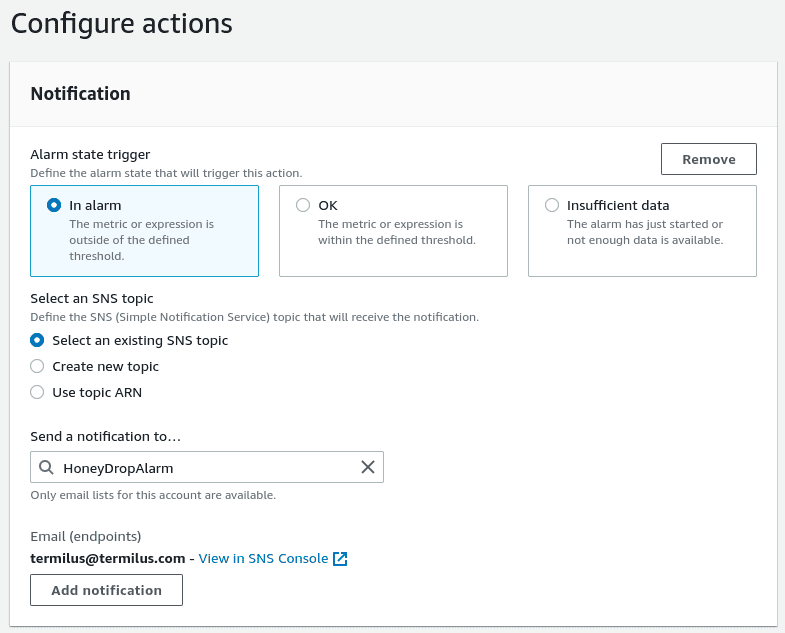 Here, we enter our alarm name and description and hit "next".

Finally, we can review our alarm and hit "Create alarm".

That's it. Now, whenever our HoneyDrop appliance lures in an attacker, its services will capture the interaction and trigger an SNS email notification - alerting you that bad things are happening.

Bits and bytes of a hacker.